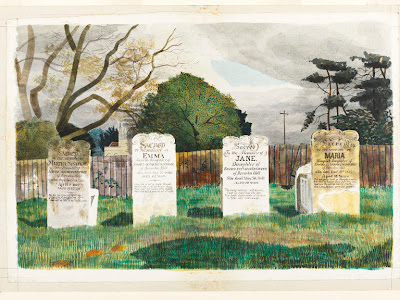 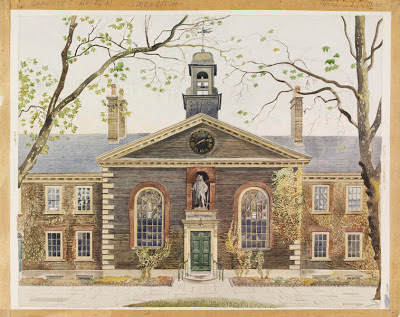 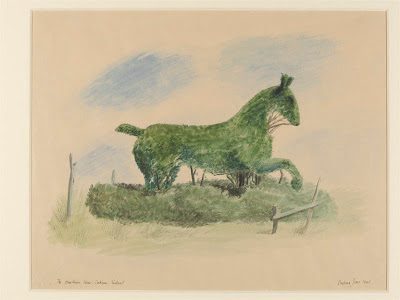 Recording Britain was a wonderful initiative led by Sir Kenneth Clark during the second world war, to employ artists to 'record' and preserve parts of Britain that might be under threat of destruction during the war. More than 1500 watercolours were made as part of this scheme both by amateurs and professional artists including John Piper, Kenneth Rowntree and Barbara Jones.
The collection is now owned by the V&A, but is currently on display at the DLI museum in Durham and well worth a visit - they are much more powerful in the flesh. Most of the series can be viewed online in the V and A collection. A few of my favourites include Kenneth Rowntree's 'Livermore Tombs', Barbara Jone's 'Hawthorn Horse' and (one not on display) Phyllis Diamond's, 'Geffrye Museum'.
This exhibition was accompanied by a talk by Gil Saunders (word and image curator at V&A) who curated the Recording Britain exhibition in 1990 and also wrote the book that accompanied this. Athough discussing the whole history to the project, I found it particularly interesting that she suggested the project as something that was induced with pre-emptive nostalgia; that the things that were chosen to be recorded were places that were imbued with a sense of importance  - and that much of this 'quintessential englishness' was found in the South; something a room full of Northerners clearly felt disappointed in. On a more positive note, as part of personal research Saunders said she had found much of the areas deemed as under threat in the war, had survived, but with a development and modernisation to their surrounding landscapes.
Posted by Alice Pattullo at 15:46