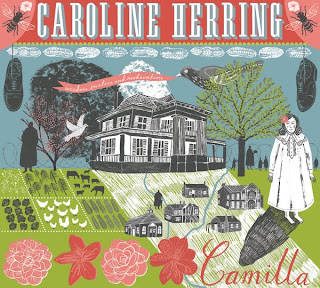 This image is going to become the cover for the album sleeve for Caroline Herring. This image responds to a few of the songs on the album but illustrate and includes several of the state symbols for Georgia - where Camilla is placed. It references the song 'Travelling shoes' which was made in response to a Eudora Welty short story; 'A Worn Path' and also 'Camilla' which reveals the story of Marion King; another woman involved in the 1960's civil rights movement, who when visiting a friend in prison in Camilla, was assaulted and beaten by the sheriff causing her to miscarry her 6 month pregnant child. No charges were ever pressed.
I will update with the final package once the album is realeased in the summer.
Posted by Alice Pattullo at 01:28