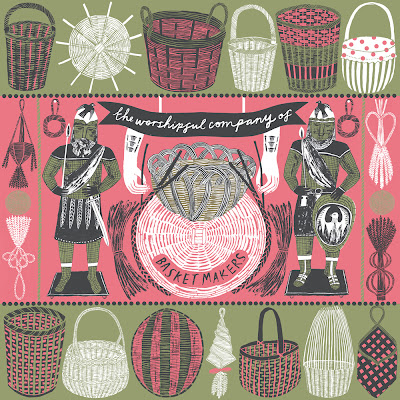 A little while ago I declared I was going to embark on illustrating all of the London livery companies (all 108).....I now have completed two. It may be a long journey ahead but I am really enjoying researching and producing images celebrating the skill and craft that the livery companies represent. This is the Worshipful Company of Basketmakers featuring Gog and Magog (the giants that are the guardians of the city of London) that often join the Lord Mayor's Show in London each year as wicker effigies of themselves. Each company has a guild design which can be seen here tattooed onto the basketmakers arms. This will be available as a screenprint to purchase very shortly.
Posted by Alice Pattullo at 01:28